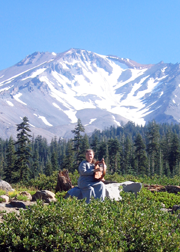 In 1971 I began writing a juvenile fantasy which I titled The Jewel of Fire., in which two children from our time get into an alternate future California in which a Cataclysm has destroyed our civilization and the Powers of Nature have reassumed their sovereignty. It was a typical first effort, but there was enough good stuff in it to keep me working, and it provided the inspiration for the eventual series. For more information, a gallery of photos, and deep background on the books, see the Westria website.In order of internal chronology, here is what the Chronicles of Westria contain so far:

“When Coyote Came to Town”, Worlds of Fantasy,ed. Marion Zimmer Bradley, MZB Productions, 1998.A story set in the years immediately after the Cataclysm that shows how humans began to understand how to deal with the Guardians.

Mistress of the Jewels (originally published in two books: Lady of Light and Lady of Darkness Pocket Books, 1982 & 1983).  Published in German as Tochter des Lights  and Tochter der Finisternis Bastei-Lübbe Verlag, 1988, and in the UK in a single volume: Lady of Light, Lady of Darkness, New English Library, London, 1990.  Reissued as: Mistress of the Jewels,Tor Books, 1991.This book tells the story of how King Jehan fell in love with Faris and was eventually betrayed by his seneschal, Caolin, who also stole and then lost the four Jewels of Power.

“The Name of A King”, The Book of Kings, ed. Richard Gilliam and Martin Greenberg, 1995.A novelette in which the son of Faris and Jehan, who does not yet know his heritage, finds his true nature and his name.

The Earthstone, Tor Books,  1987, New English Library, London, 1991. Published in German as Die Erdestein, Bastei-Lübbe Verlag, 1990.Julian finds that in order to claim the throne he must recover the four lost Jewels of Power, starting with the Earthstone.  With the help of companions including the Master of the Junipers, Silverhair, his cousin Frederic, and a girl called Rana, he journeys from Ojai to the roots of Mount Diablo to find it, while Caolin tries to stop him.

The Sea Star, Tor Books, 1988,  New English Library, London, 1991, Der Meerstern,  Bastei-Lübbe Verlag, 1991.Caolin has sent sea-raiders against the coasts of Westria, led by his own daughter, Ardra. She captures Frederic and Rana, who finds the Sea Star and becomes one of the People of the Sea in order to bring it to Julian.  But Julian must make his own peace with the Powers of Water in order to master them and defeat Ardra’s navy.

The Wind Crystal, Tor Books, 1990, New English Library, London, 1992, Der WindKrystal, Bastei-Lübbe Verlag, 1991.Tongue-tied by Caolin’s sorcery, Julian cannot persuade the Estates of Westria to recognize him as king until he follows the mute boy Piper to the Ramparts (the Sierras) to find the Wind Crystal.

The Jewel of Fire, Tor Books, 1992, New English Library, London, 1993. Der Feuerjuwel, Bastei-Lübbe Verlag, 1995.Julian takes the Jewel of Fire from the heart of a volcano (Mt. Lassen), but barely has time to hide it before Caolin captures him.  With the help of Coyote, Rana follows him and recovers the Jewel, but both are tried by fire before she is able to rescue him. Julian leads the forces of Westria to battle against Caolin’s army, which ends in a final magical confrontation with the sorcerer, but in the end both he and Caolin can only be healed by love.

The Golden Hills of Westria, Tor Books, 2006. (also available as an ebook from the publisher)King Julian has reigned in peace for twenty-five years. Those who came of age fighting the sorcerer Caolin are now dealing with the uncertainties of middle age. Their children have grown up in the shadow of their parents’ legends. The Seneschal’s daughter Luz goes to the College of the Wise, while King Julian’s son Johan seems to be going to the dogs. And then he disappears.But worse is in store for Westria. On the Sea of Grass that lies beyond the Barren Lands, a fanatical cult led by a charismatic priestess has acquired a general, and they are seeking the fabled Golden Land on the shores of the Western Sea. When these “Suns” fight their way across the Southwest to reach Westria, King Julian will face a challenge for which nothing in his past has prepared him. But it is Jo, fighting for both life and sanity, and Luz, struggling with the temptations of power, who are the only ones who can finally face this foe. 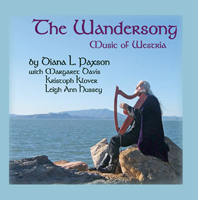 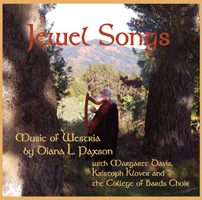 Jewel Songs, CD’s of the best music from the books, with Margaret Davis and Kristoph Klover of Broceliande.

If you’ve read Golden Hills, you will recall that there are still a few questions. What happened to the Iron General? Will Jo continue to heal? How are Westria, not to mention Elaya and Aztlan, going to cope with the aftermath of the war?  Too many people have been asking me those questions, and I’ve promised to write the book that answers them.

I am also working on making the entire series available as ebooks.